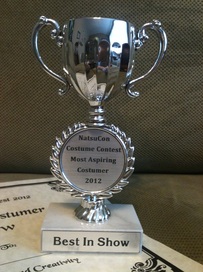 Kafae Latte has won several awards for costume-making at various conventions including Best in show, Most Attention to Detail - Master Class, Best in Class Journeyman, and 2nd Place Journeyman Class as well as having several costumes she helped make win awards also.Kafae has also been in a few skits including a Skit Showcase in 2012, and has co-hosted a "Armor Making on a Budget" Panel at Natsucon which detailed her easy and award-winning armor making process.

This is a resource devoted to helping people learn how to make more art! It began as a manga-making tutorial site, but my ambition for other projects has led me to expand the site into a cosplaying, sewing, ball jointed doll making, plushie crafting, art explosion with lots for everyone! I hope you find it useful. :)
Its information comes from years of experience as well as outside sources such as books, web sites, other authors, etc.